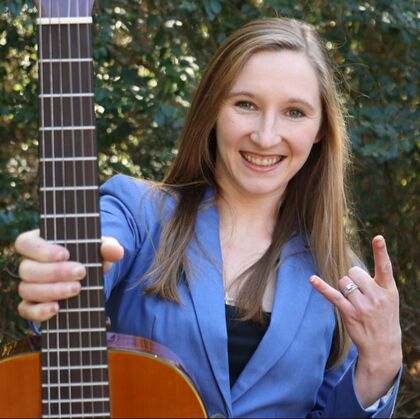 Nicole Guimaraes (she/her) has had a dynamic and varied career in music education, teaching at schools in Florida, Connecticut, Georgia, and now Northern Virginia. She has taught everything from middle school band, strings orchestra, and general music to elementary school strings. Nicole currently serves as the K-2 Music Teacher at Mount Daniel Elementary School in Falls Church, VA.

Nicole has been the recipient of several grants, including a 2019 Georgia Music Foundation Grant. With this grant, Nicole hosted a program called, “Electrify Your Choir” with Emmy-nominated singer, Laura Kaye, and choreographer, Nathan Blake. In 2018, Nicole was named as a Fund for Teachers Fellow. This fellowship, a self-designed professional learning experience gave Nicole the opportunity to travel to Nairobi, Kenya. In Kenya, she collaborated with the Art of Music Foundation. This included teaching the Ghetto Classics Orchestra and the Link Up recorder programs in various Kenyan slums and communities. During her stay, Nicole conducted both the Ghetto Classics Wind Ensemble and Safaricom Youth Orchestra in concert. She also taught numerous master classes and lessons.

An avid proponent of the modern band movement in music education, Nicole utilizes the Little Kids Rock program in her music curriculum. In the summer of 2019, Nicole presented her poster called “Ukulele… in Kindergarten!?” at the Modern Band Summit in Fort Collins, CO. During her time in Connecticut, Nicole served as the co-chair of CMEA Southern Region World Drumming Ensemble, working to diversify the student make-up of the regional festival.

Nicole’s success as an educator can be seen through the many achievements of her students. Her students have won full scholarships to festivals such as the National Take a Stand Festival, sponsored by the LA Philharmonic and the Morse Summer Music Academy in New Haven, CT. They have also won the Little Kids Rock national songwriting contest.

Nicole currently resides in Falls Church, VA. She is a proud Navy Wife, as her husband, Joseph, is a member of the U.S. Navy Concert Band. Together they enjoy playing, cuddling, and walking their adorable rescue dog, Comet.